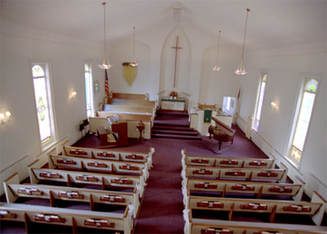 ​In 1867, a group of twenty four Frankfort citizens gathered together with the purpose of establishing a church for the young town.  A council convened on January 26, 1868, to organize The First Congregational Church of Frankfort.  Rev. J.B. Walker was the leading influence for the founding members, receiving assistance from the Benzonia Congregational Church.

A subscription paper was circulated in the spring of 1871 to raise funds with which to build a church building.  The Land Company donated a lot, and the building was erected at a cost of $5,000.  Donations came from the Building and Loan Fund of the National Association of Boston.  The plans used in the construction were also donated.  The church was incorporated in 1874.  In 1907, the sanctuary was raised and a basement added, using large rocks as the foundation. The north end of the church was built in 1957.  This addition enlarged the kitchen, added a spacious dining room and provided two offices, three classrooms and a nursery above the dining room.

As far as we are able to discern, no major restoration has been done to the building until the steeple renovation which began in the summer of 1998.  We hope that you feel at home here and we encourage you to “wander around.”